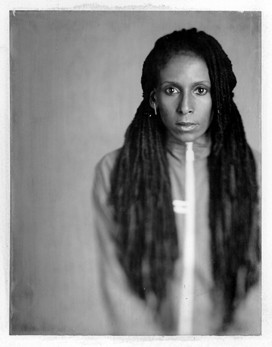 Renee Cox is an African American artist and photographer that calls for black representation in the art world. She was born on October 16, 1960, in Colgate, Jamaica to an upper-middle-class family. Cox's first ambition was to become a filmmaker. However, Cox earned her master's in Fine Arts in photography from the School of Visual Arts and completed the Whitney Independent Study Program. Her work showed a deep concern for social issues and employed religious imagery of black people. In the series Flipping the Script, Cox took several European religious masterpieces, including Michelangelo's David and The Pieta, and reinterpreted them with contemporary black figures. In 2001, the photograph Yo Mama's Last Supper created the most controversy at the Brooklyn Museum in New York City. It was a remake of Leonardo Da Vinci's Last Supper with a nude Cox sitting in for Jesus Christ, surrounded by all black disciples, except for Judas who was white. Many Roman Catholics were outraged at the photograph. Then New York Mayor Rudolph Guiliani called for the forming of a commission to set "decency standards" to keep such works from being shown in any New York museum that received public funds. To defend her work against critics, she said, "...Christianity is big in the African-American community, but there are no representations of us." She continued,. "I took it upon myself to include people of color in these classic scenarios." The reason for her work was to prove that the subject of black people is barely explored in the work of white, male artists. Cox’s combination of traditional and contemporary art creates a whole new viewpoint and provides inclusivity.