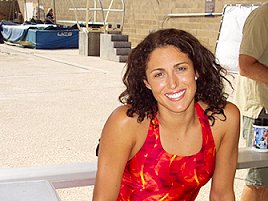 Gabrielle Rose competed at the 1996 Atlanta Olympics for Brazil, swimming the 100 freestyle, 100 butterfly, and the 200 individual medley. With an American father (who was the CEO of Holiday Inn) and a Brazilian mother, she had dual citizenship and switched allegiance to the United States, swimming the 200 IM for them at the 2000 Sydney Olympics. Rose swam in college at Stanford, graduating in 2000. She later earned an MBA from Stanford in 2009. Rose won two gold medals at the 2003 World Championships in relays for the USA. While representing Brazil she won three medals at the 1995 Pan American Games, a silver in the 100 butterfly, and bronze medals in the 4x100 freestyle relay and the medley relay. She later swam at the 1999 Pan Ams for the US. Rose won a silver medal in the 200 IM at the 2002 Pan Pacific Championships, swimming for the USA.