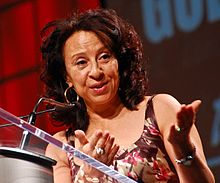 Is the anchor and executive producer of Latino USA on National Public Radio, a public radio show devoted to Latino issues. She helped launch Latino USA in 1992 and has also worked for CNN, as well as written two books. The journalist also hosted her own show for five years on PBS, Maria Hinojosa: One-on-One, an interview talk show. Throughout her career, Hinojosa has helped define the conversation about our times and our society with one of the most authentic voices in broadcast. Hinojosa is the author of two books including a motherhood memoir, Raising Raul: Adventures Raising Myself and My Son. She was born in Mexico City, raised in Chicago, and received her BA from Barnard College.