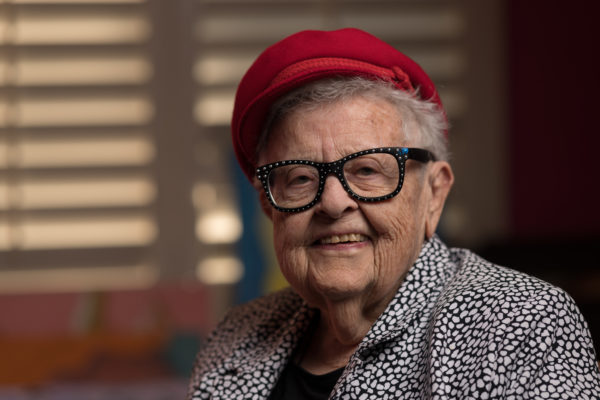 Ivy Bottoni is an American women’s rights and LGBTQ+ rights activist and artist! Bottoni was born on August 15th, 1926. From 1944 to 1947, Bottoni attended Pratt Institute School of Art, where she earned a certificate in advertising graphic design and illustration. Ivy Bottoni realized she had same sex attraction at a very earlyy age, in fact her first crush was her first grade gym teacher. However, despite Bottoni’s attraction to women, she did not pursue these feelings, nor same-sex relationships due to cultural norms at the time. Due to Bottoni’s many engagements not lasting, Ivy Bottoni was introduced to the National Organization for Women and found solace in it. Bottini helped found the New York chapter of NOW in 1966. Soon after becoming president of the New York chapter of NOW in 1968 she came out as a lesbian. She left her husband and moved in with a woman in New York City. Ivy Bottoni’s activism started as soon as she joined the National Organization for Women! She helped found the New York chapter of NOW, was elected president for it, and also designed the logo National Organization for Women, which still stands and is used today for the organization! Also in 1969, she held a public forum titled "Is Lesbianism a Feminist Issue?", which was the first time lesbian concerns were introduced into the National Organization for Women. During Bottoni’s time at the National Organization for Women's New York chapter, she also introduced feminist consciousness rising, which was later adapted for all chapters in the organization to participate in. Unfortunately, in 1970, Betty Friedan engineered the expulsion of lesbians from the National Organization for Women's New York chapter, including Ivy Bottini. In 1971, Ivy Bottoni moved to Los Angeles where she founded AIDS Network LA, the first AIDS organization in Los Angeles, and the Los Angeles Lesbian/Gay Police Advisory Board. In 1977, she created and hosted the first Lesbian/Gay radio show on a mainstream network (KHJ in Los Angeles.) In 1978, she was the Southern California deputy director of the successful campaign against the Briggs Initiative (No on 6), which would have banned gays and lesbians from teaching in California's public schools. She later chaired the successful No on LaRouche and No on 64 Initiative campaign. The Larouche initiative (Number 64), which was not passed, might have quarantined people with AIDS. In 1981 she was appointed by then-governor Jerry Brown as Commissioner for "California Commission on Aging", making her the first "out" lesbian or gay person to be appointed to a state board or commission. In 1993, Bottoni co-founded the nonprofit organization Gay & Lesbian Elder Housing, which in 2007 developed Triangle Square, the first affordable housing complex for gay and lesbian senior citizens in the country. From 1998 until 1999, she also co-chaired the addiction and recovery city task force, and established the ad hoc committee City of West Hollywood, to publicize the issue of lesbian and gay partner abuse. From 2000 to 2010, Ivy Bottoni co-chaired the Alliance for Diverse Community Aging Services to help and assist lesbian and gay seniors obtain assisted living and affordable retirement. Bottoni and the Lavender Effect, an LGBTQ+ history organization, are currently advocating for a LGBT museum in Los Angeles. Bottoni is also advocating for the creation of an AIDS memorial in West Hollywood. Ivy Bottoni has earned many ground-breaking awards for work and activism over the years, which was well-deserved! Her activism has helped many members of the LGBTQ+ community in many different and diverse ways! Ivy Bottoni’s activism is truly inspiring and compelling to young women around the globe! Her work has helped many people feel able to express themselves and has allowed them to be true to themselves! Ivy Bottoni has worked countless hours and many days to make sure LGBTQ+ women and men feel at home with themselves! She has helped thousands of people feel safe and loved, through her amazing and jaw-dropping work! She has helped countless people suffering from the AIDS epidemic and has helped others be educated and stay informed about it in the past, again through her work! Ivy Bottoni is a huge feminist icon and has helped assist many elderly LGBTQ+ members with their living necessities! I believe Ivy Bottoni is a great role model for young children to looks up to and will help them strive to change the world!