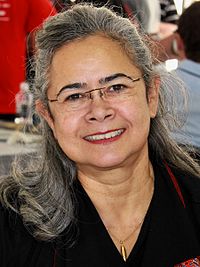 Esmeralda Santiago was born in San Juan, Puerto Rico, and lived there until she was thirteen years old. In 1961, she moved to the United States. She was the eldest in a family that would eventually include eleven children. Santiago attended New York City’s Performing Arts High School, where she majored in drama and dance. After eight years of part-time study at community colleges, she transferred to Harvard University with a full scholarship. She graduated magna cum laude in 1976. Later, she earned her master’s degree at Sarah Lawrence College and was awarded honorary doctorates from Trinity University and Pace University. However, Santiago’s success did not come easily. She faced discrimination and economic instability as a newly arrived immigrant. She also helped to support her mother and siblings. Her dream was to fulfill herself as a woman and a person, discover her identity and find her calling. She describes her experiences in her first book, When I Was Puerto Rican (1994), her second work, America’s Dream (1996), and Almost a Woman (1999). The themes in these works include immigration, Puerto Rican identity and self-discovery, the shift to a new culture, and acceptance of a bicultural, multiethnic, and bilingual model. The retelling of her memories has made her an inspiration to women in search of their identity and for Latina/o readers who struggle to assimilate into American culture without giving up their traditions and language.