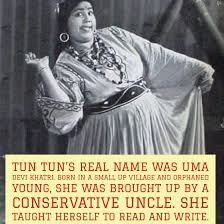 Uma Devi Khatri or better known as “Tun Tun” which literally means fat woman was born on July 11th 1923 in United Provinces, British India. She passed away on November 24th 2003 in Mumbai, India. She was born in a small village near Amroha district. Her parents and brother were murdered over a land dispute. Due to the death of her whole family, she lived through poverty until she met Akhtar Abbas Kazi, Excise Duty Inspector, who helped and inspired her. Uma eventually relocated to Bombay to pursue a career in playback singing and also became an comedic actress who was given the title of Hindi cinema’s first-ever comedienne. Uma moved to Bombay at the age of 23 and made her way to see composer, Naushad Ali. She one day knocked on his door and informed him that she could sing and would throw herself in the ocean if he didn’t give her a chance. She was given an audition and was hired on the spot. Her solo playback singer debut was “Wamiq Azra” in 1946. Thereafter, she signed a contract with the producer-director, A.R. Kardar. She was doing well as she had huge hits like: “Afsana Likh Rahi Hoon Dil-e-Beqarar Ka”, “Yeh Kaun Chala Meri Aankhon Mein Sama Kar”, and “Aaj Machi Hai Dhoom Jhoom Khushi Se Jhoom”. Next year, she reached new heights as she sang two hits, “Kahe Jiya Dole” and “Dil Ko Lagake Humne Kuch Bhi Na Paya”. Her fame had reached to the league of top playback singers and she continued with seven songs in the film, “Chandralekha”. This moment became her most accomplished work in her career. Eventually young artists like Lata Mangeshkar and Asha Bhosle reigned which led Uma to try acting as she has a bubbly personality and great comic timing. Uma was a huge fan of Dilip Kumar and wished to worked with him in her first film. Her dream came true as together they completed the film, “Babul”. Her persona “Tun Tun” was born after that film and stuck with her. She continued to act in the film, “Aar Paar” and “Mr. & Mrs. ‘55” and “Pyaasa”. She was a very talented comedic actress and her career spanned for five decades. She has acted in about 198 films in multiple Indian languages. Uma Devi Khatri was an inspirational woman as she was traumatized at a very young age due to the murder of her family. Although she went through much hardship as she had nothing, she was lucky to meet someone who helped and inspired her to move forward. I appreciate Uma’s initiative and aggressiveness to go to a composer’s home to become a playback singer. As she works hard, she had other opportunities to become a comedic actress and became a very successful woman.