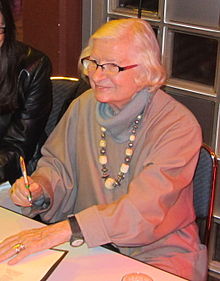 Phyllis Dorothy James, Baroness James of Holland Park, OBE, FRSA, FRSL, known professionally as P. D. James, was an English crime writer. She rose to fame for her series of detective novels featuring police commander and poet Adam Dalgliesh. James was born in Oxford, the daughter of Sidney James, a tax inspector, and educated at the British School in Ludlow and Cambridge High School for Girls.[3] She had to leave school at the age of sixteen to work because her family did not have much money and her father did not believe in higher education for girls. She worked in a tax office for three years and later found a job as an assistant stage manager for a theatre group. In 1941, she married Ernest Connor Bantry White, an army doctor. They had two daughters, Clare and Jane. When White returned from the Second World War, he was experiencing mental illness, and James was forced to provide for the whole family until her husband's death in 1964. With her husband in a psychiatric institution and their daughters being mostly cared for by his parents, James studied hospital administration and from 1949 to 1968 worked for a hospital board in London. She began writing in the mid-1950s, using her maiden name. Her first novel, Cover Her Face, featuring the investigator and poet Adam Dalgliesh of New Scotland Yard, named after a teacher at Cambridge High School, was published in 1962. Many of James's mystery novels take place against the backdrop of UK bureaucracies, such as the criminal justice system and the National Health Service, in which she worked for decades starting in the 1940s. Two years after the publication of Cover Her Face, James's husband died, and she took a position as a civil servant within the criminal section of the Home Office. She worked in government service until her retirement in 1979. On 7 February 1991, James was created a life peer as Baroness James of Holland Park, of Southwold in the County of Suffolk.She sat in the House of Lords as a Conservative. She was an Anglican and a lay patron of the Prayer Book Society. Her 2001 work, Death in Holy Orders, displays her familiarity with the inner workings of church hierarchy. Her later novels were often set in a community closed in some way, such as a publishing house or barristers' chambers, a theological college, an island or a private clinic. Talking About Detective Fiction was published in 2009. Over her writing career, James also wrote many essays and short stories for periodicals and anthologies, which have yet to be collected. She revealed in 2011 that The Private Patient was the final Dalgliesh novel. As guest editor of BBC Radio 4's Today programme in December 2009, James conducted an interview with the Director General of the BBC, Mark Thompson, in which she seemed critical of some of his decisions. Regular Today presenter Evan Davis commented that "She shouldn't be guest editing; she should be permanently presenting the program." In 2008, she was inducted into the International Crime Writing Hall of Fame at the inaugural ITV3 Crime Thriller Awards. During the 1980s, many of James's mystery novels were adapted for television by Anglia Television for the ITV network in the UK. These productions have been broadcast in other countries, including the US on the PBS network. They featured Roy Marsden as Adam Dalgliesh. According to James in conversation with Bill Link on 3 May 2001 at the Writer's Guild Theatre, Los Angeles, Marsden "is not my idea of Dalgliesh, but I would be very surprised if he were." The BBC adapted Death in Holy Orders in 2003, and The Murder Room in 2004, both as one-off dramas starring Martin Shaw as Dalgliesh. Her novel The Children of Men (1992) was the basis for the feature film Children of Men (2006), directed by Alfonso Cuarón and starring Clive Owen, Julianne Moore and Michael Caine. Despite substantial changes from the book, James was reportedly pleased with the adaptation and proud to be associated with the film.