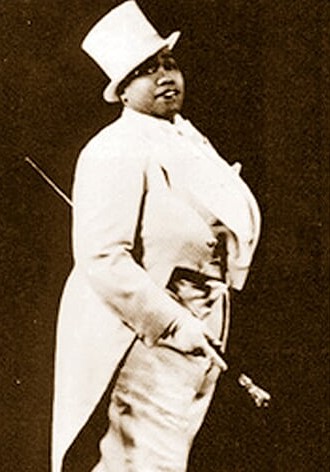 Gladys Bentley, a luminary of the Harlem Renaissance, began her blues career singing at rent parties (held to raise rent money by charging attendees) and underground establishments in Harlem, New York. As Bentley became more popular, she started performing at Harry Hansberry’s Clam House—one of New York City’s most well-known gay speakeasies—in the 1920s. Openly lesbian, she sang raunchy remakes of popular tunes in a deep voice, dressed in her signature men’s style of tuxedo and top hat. Drag performers often backed her up at the Ubangi Club. She also appeared at the the Apollo Theater and the Cotton Club. In his 1945 autobiography, Langston Hughes described her as, "An amazing exhibition of musical energy." She would later denounce her lesbianism during the McCarthy era in an Ebony magazine article, "I Am Woman Again." She kept on performing, but in women’s clothing. Learn more about this trailblazer on the Smithsonian Sidedoor podcast episode "Singing the Gender-Bending Blues."