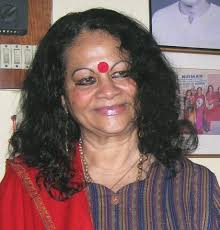 Mamoni Raisom Goswami was born as Indira Goswami in November 14th 1942 and passed away on November 29th 2011. Her pen name is Mamoni Raisom Goswami and many also know her as Mamoni Baideo. She was born in Guwahati, India to Umakanta Goswami and Ambika Devi. The family was deeply associated with the Sattra life. Mamoni completed Intermediate Arts from Handique Gils College and then went to Cotton College to study Assamese Literature. She followed up with a Master’s in Assamese Literature from Gauhati University. When Mamoni was still a student, she published her first collection of short stories, “Chinaki Morom” in 1962. She was influenced by Kirti Nath Hazarika, editor, to go into the field of literature. Mamoni eventually became an Indian editor, poet, professor, and writer. She has won many awards and her work were translated into English. She also participated in social changes through her writing and as a mediator. Mamoni struggled all her life as she suffered from depression in her childhood and adulthood. She has repeatedly attempted suicide during her youth and it worsen as her husband who she married for eighteen months passed in a car accident. The event led her to be addicted to sleeping pills. As she bounces back, she became a teacher in the Sainik School. While a teacher, she went back to writing as it was the only thing that kept her alive. Afterwards, she was persuaded to relocate to Vrindavan where she worked as a researcher. She went along and was able to publish her novel, “The Blue Necked Braja” in 1976 which came from her experiences as a widower and researcher. It strongly expressed how widowers couldn’t have companionship and suffered through poverty and sexual exploitation. Mamoni then joined the University of Delhi as a Professor of Assamese in the Modern Indian Languages & Literary Studies Department. While in Delhi, she wrote most of her greatest works like: “Hridoy”, “Nangoth Sohor”, and “Borofor Rani”. She eventually became the head of the department. She continued to write until her passing day. Mamoni is an inspirational woman as she battles with depression since her childhood and deals with addiction when her husband passed not long after their marriage. She was able to find something to motivate her to live and do something with her life. She endured and became a professor and writer who used her platform to educated readers about her communities’ issues, gender inequality, and mistreatment of widowers. Other than using her platform, she was outspoken during the United Liberation Front of Asom which resulted in the creation of the People's Consultative Group.