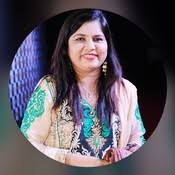 Sadhana Sargam was born on March 7th 1969 to a family of musicians at Dabhol, India. Her mother, Neela Ghanekar, was a classical singer and music teacher who knew Anil Mohile, an arranger-composer. Sadhana started at a very young age as she was part of a children’s chorus in the song, “Pam Pararampam, Bole Jeevan Ki Sargam” by Kishore Kumar. Sadhana also participated in her first live performance at the age of four. She continued to do performances and by the age of ten, she won a Central Government scholarship which allowed her to learn under Pandit Jasraj, Indian classical vocalist. In addition, she learned from Vasant Desai as she performs in his documentaries, films, and live shows. Sadhana became to be an Indian playback singer who mainly did Hindi and Tamil films. She has won many awards and specifically earned the Lata Mangeshkar Award from the Government of Madhya Pradesh. Sadhana’s playback debut started with the Gujarati film, “Kanku Pagli”. Her first Hindi playback was in the film, “Rustom”. She continued to find more opportunities where she was the only female singer but she was only noticed for her song in the film, “Janbaaz” in 1986. As time past, she worked with Anu Malik, R.D. Burman, Anand Milind, and Laxmikant-Pyarelal but she was mainly getting noticed when working with Rajesh Roshan. By the end of the 1980s, she rise with the film, “Tridev”. Between 1990 and 2000, she started to reach fame and migrated to South Indian films. By the start of 1990, she was one of the most sought out female singers and had a playback hit in the film, “Vishwatma”. She had a record for the only Indian playback singer currently singing in 27 regional languages. She even won the National Film Award for Best Female Playback Singer for the song, “Pattu Solli”. She has won Filmfare awards, IIFA, Star Screen, and other major awards. She even has done work in Bengali which started in 1992 with the film, “Daan Pratidan”. Sadhana is an inspiration as she was a child prodigy in the music world. She was a child star who performed at the age of four and continued her passion for singing with the guidance of her mother and coaches. She is a hard worker and dedicated to become a great singer. In addition, being awarded the Lata Mangeshkar Award by the government is highly respectable and displays her talents.