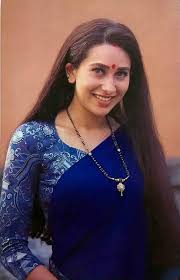 Karisma Kapoor is a Bollywood film actress who was born on June 25, 1974 in Mumbai, India to the actors Randhir Kapoor and Babita. She is the older sister of actress, Kareena Kapoor. Karisma is Hindi-Punjani from father side and Sindhi-British from mother side. Since childhood, she wanted to become an actress and was inspired by the actresses Sridevi and Madhuri Dixit. Karisma often attended award ceremonies and film sets with her parents. Although she comes from a family of actors, her father did not like the idea of women working in films because he thought that it would become problematic with the traditional maternal duties and responsibilities of the household. As a result of this, Karisma's parents separated and she was raised by her mother. Karisma was in college when she saw the opportunity to become an actress to primary provide financial support for her mother. When she was seventeen years old, she starred in her first film, “Prem Qaidi”. The film received mediocre success and mixed reviews. Although she was hired in many film roles, most of her work wasn’t successful. However, she gradually rise in popularity by starring in commercially successful films, “Jigar”, “Anari”, “Raja Babu”, “Coolie No. 1”, “Jeet”, and “Saajan Chale Sasural”. Her career reached new peaks in 1996 after winning the Filmfare Award for Best Actress in the highest grossing film of 1996, “Raja Hindustani”. This led her to more opportunities to bigger films like “Hero No.1” and “Dil To Pagal Hai” which earned her a Zee Cine Award nomination and two awards, National Film Award and Filmfare Award for Best Supporting Actress respectively. She continued to work in the film industry and earned her second Filmfare Award in “Fiza” and Filmfare Critics Award for Best Actress in “Zubeidaa”. As time passes, she has also ventured into television and web series in 2020. Aside from acting, Karisma has participated in several charities and organizations. She supported Salman Khan's charitable organization, Being Human Foundation, which provides education and healthcare services for underprivileged children in India. Additionally, Karisma performed at the HELP! Telethon Concert to help the victims of the 2004 Indian Ocean earthquake. In 2012, Karisma was a goodwill ambassador for Pinkathon for breast cancer awareness. The following year, she took part in a campaign to emphasize the rights of girls in India. Karisma is an inspiration as she dropped out of college at the age of seventeen and face adversity in her career as she tries to be financially responsible to care for her mother. Even so, she stayed persistent, worked hard, and eventually became a successful actress. Furthermore, she contributes back to the world by supporting education, disaster reliefs, female empowerment, and female agendas.